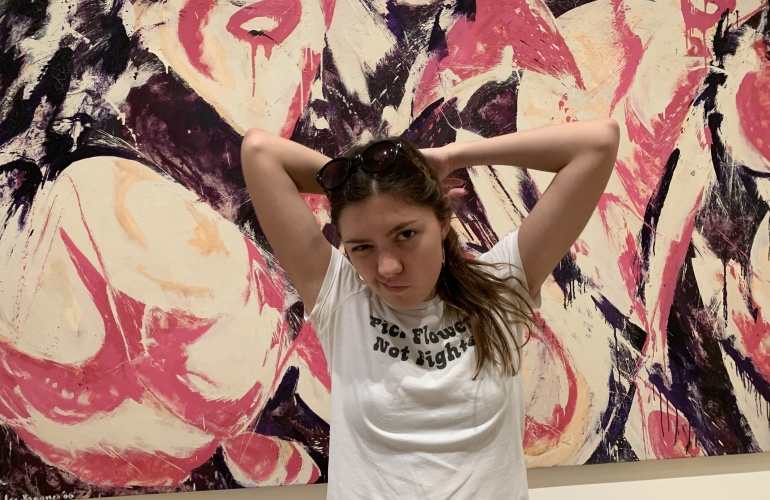 Nothing renews my excitement and love for New York City more than being away from it for a while and then finally being able to return. That’s how I felt a few weeks ago when I arrived in New York City with my mother for my 21st birthday, after being home for about a month.

When I’m not doing that, I am spending my days doing my four favorite things in life: reading, writing, painting, and swimming. My life is the absolute worst in case you couldn’t tell. So why did I choose to leave it even for a little bit? Because New York City was calling my name, I was about to turn 21, and my friends were in the city, so it was always my dream for my first legal drink to be in the city with my girlfriends. With that in mind, my mother and I decided to beat the heat by leaving south Georgia and heading to New York City, where it actually wasn’t that much cooler.

Specifically, we stayed in Chelsea, at a hotel just down the street from the Flatiron Building. Our hotel room had a particularly magical view of the Hudson River with Lady Liberty visible on the horizon.

On day one we sat outside of the Flatiron Building, drinking and eating tacos at a nearby restaurant.

We watched people walk by with countless Harry Potter bags, enough to make you wonder “why is even acting like they just left Harry Potter World?” The answer, it turns out, was because there was a giant Harry Potter store nearby.

No, I was not too old to walk up and down the Chelsea Harry Potter store with its Dumbledore-themed spiral staircase down the center of it. There were wands, chocolate frogs, Hogwarts scarves, and other paraphernalia for sale and I showed enormous restraint in not buying anything.

We also watched two blocks of people wait outside a cafe to get served, cafe-style by pop star Conan Gray during a merch drop that coincided with the release of his second album. Aw, yes, New York City, where you can be in such close proximity to famous people just by walking down the street.

That same day, we went to The Strand bookstore, a place that always feels the love from my mother and me whenever we visit New York. I strutted around the bookstore, flipping through the books that I found interesting, seeing the books that were written by Sarah Lawrence professors, and having to pretend to look busy while my mom bought the books on my birthday list.

When we returned from The Strand, the crowd of people was still standing around to see Conan Gray, even though he had long since cleared out. We found this out by having my mom ask the only close in age person she could find in line, a forty-something-year-old-man who seemingly had his teenage daughter for the weekend.

“Conan Gray is doing a merch drop,” was his very matter-of-fact answer, followed by, “he’s a pop star.”

“I know who Conan Gray is,” I told him. I was, after all, about to be a board-certified 21-year-old.

We didn’t stick around for his merch drop (did I mention the line?) but instead we went in search of food, the first of many great meals. This was a wonderful start to my almost week long trip. Six days in New York City: John Mulaney at Madison Square Garden, a Tony-award winning Broadway show, two museums, the Strand, Central Park, the Chelsea marketplace, some super cool people, and my 21st birthday.

The plot is about to thicken. I’ll keep you posted.

Life is Art
Our Lorde and Savior at Radio City Music Hall
Tchaikovsky and Pushkin: my last trip to the opera for a while
A Night on the Town
Spring Breakers!
The Late Show with Raquel Antonette
L'opera: Tosca
Raquel and the Cursed Child
Valentine's Day 2022: An Open Letter to Valentine's Day
The New Year's Newsletter
All the Books I Read in 2021
Getting my Royal Portrait Made
Making my Spirits Bright
Blasé at the Ballet: An Outing to See the Nutcracker
Christian Dior and David Gerson
Chanel on Ice
Where art thou?
Halloweekend