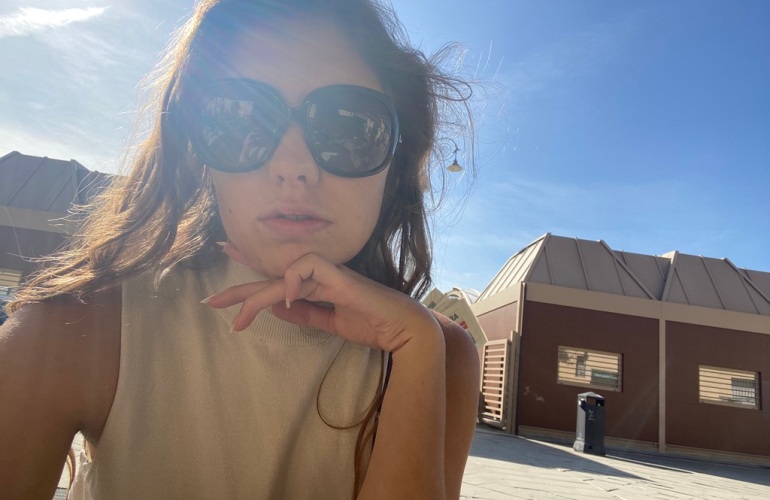 Dolce far niente means “the sweetness of doing nothing” and there’s no better place to do sweet nothings than Florence.

It was while I was doing nothing in Florence that I made many shrewd observations:

Negronis are the strongest drinks in the known universe and taste like lighter fluid, going straight to your stomach and straight to your brain at the same time, Venus has abs for weeks and is surrounded by beautiful flowers, and rowing your boat down the River Arno looks fun but I’d have to do that with other people because if I tried to row, row, row my boat gently down the stream by myself, you’d all be reading about a tragic drowning accident in a few days time.

Let’s start at the beginning:

The buses were on strike, which was bad news for everyone except for the taxi services, so I spent most of the afternoon on foot in my knee-high boots, and feeling like I’d walked the length of Florence. I’d been listening to “These Boots Are Made For Walking,” which is ironic since my boots were in fact not made for walking. It was a bright, warm, and sunny day that made me feel mellow to my core.

As anyone who knows me will tell you, I really value the time I spend with me, myself, and I. It is for that reason why I set out on my own to find a cafe when I found an open-air market. In movie-like fashion, I made my way through every stall of nostalgia-based thrift stuff, bought myself a book on Florence, drank my chai latte outside of a cafe while reading “Call Me By Your Name,” and then did the same thing inside an empty restaurant that played real jazz from the 40s.

It would be at this point in the movie that I would stumble upon an attractive young guy who is very interested in me and therefore sparks up a conversation, changing my life forever. No such thing happened to me this time, thank god.

When I’d gotten my fill, I walked back to the Ponte Vecchio, lingered there for as long as I felt like, and then walked to the Uffizi where I spontaneously decided that this would be the day that I would see “The Birth of Venus” by Botticelli for the first time.

I got lost in the Labyrinth that is the Uffizi but wound up on a rooftop restaurant where I had my first Negroni. It was a day for trying new things so I did it. I do, however, doubt that I’ll do it again. I took one sip and immediately felt drunk.

After not finding the painting for a while and having seen everything else the museum had to offer, I approached the two people I’d overheard speaking English with American accents and asked them where “The Birth of Venus” was. The vibe was very much “my fellow Americans.”

They led me to it and I saw her, taking up the entire wall with a pool of people around her. I walked right up to the painting, stunned to finally see it in front of me. It was no longer a watercolor painting on the back of a postcard, nebulously out of reach. It was right there in front of me, partitioned by only a thin layer of glass.

I wanted to reach out and touch this time capsule of feminine beauty. Instead, I stood there mesmerized by the flowers in the painting, which I’d never noticed before, and turned behind me to get everyone else to notice them too so that they could join in on my enthusiasm and bask in the beauty of it with me.

“Move out of the way,” said the man behind me who clearly didn’t want me to see the Birth of Venus up close and probably doesn’t support women. His wife made the international hand gesture for moving out of the way and then I did, but once they’d “moved out of the way” themselves, I got a different man to take my picture with Venus.

After my picture, I stood there, now uninterrupted, and stared at her for as long as I wanted and as close as I wanted, before leaving myself.

The next day, I returned to the same area to witness an opera singer busking in the streets in front of the Uffizi, singing her heart out. Her voice was perfection, which begs the question of what she was doing on the streets of Italy and not on the stage of the Sydney Opera House.

I then sat and had my portrait drawn by a man who spoke Italian with me. The opera singer started up again in front of me while someone played the “Bach G major” on the cello behind me. It felt strange in that moment to think that this was my life.

Posing for a drawing invokes a pseudo-celebrity feeling, as you attract the attention of random people and tourists on the street glancing over at you and taking pictures of you and the drawing as it is being created.

This was a supremely good Florentine day. Moments like this don’t always last or come around often. That is why it is important to do nothing when you have the chance and to enjoy the sweetness of doing nothing.

Creature of the Night

Siena Waits For You