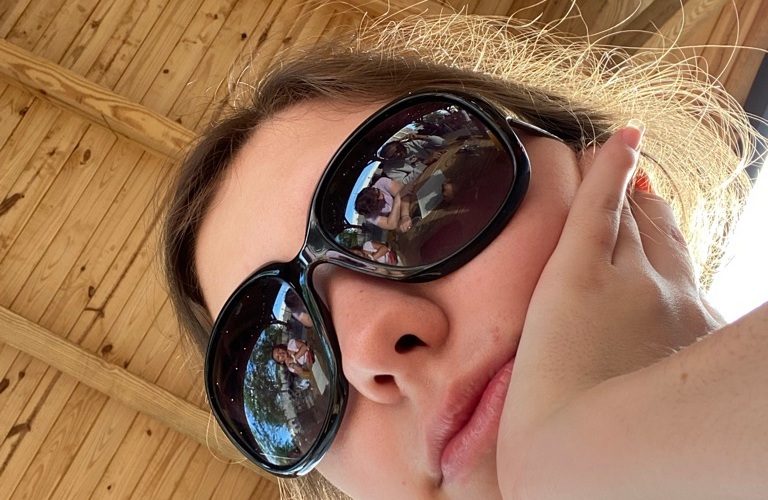 After a headache-inducing college move out, executed by myself, I arrived in Athens, Georgia, where I made a brief pit stop to see my brother Bobby and his girlfriend Mikaela, en route to my parents’ house in Valdosta. I was promised a weekend of fun, with them dragging me around to all of their favorite restaurants and Athens spots, all the while hanging out with their ragtag group of friends, and I was not disappointed.

I stayed in their apartment with them and their overly-skittish cat, Itty Bitty, who isn’t so itty bitty anymore. She’s the very definition of a scardy cat, so she had to warm up to me all throughout the week. At first I’d catch her peeking her head around the corner to get a look at me and then I’d occasionally wake up to her staring at me and audibly licking herself. Nothing says, “I’m staying with relatives” quite like being non verbally sexually harassed by your sibling’s anxiety-ridden and emotionally-stunted cat.

After a lovely wake up call from Itty Bitty, I started my day. Even though I left New York, I still could walk down the street and get a bacon, egg, and cheese on a fresh onion bagel. This was the case at least on my first day in Athens when Bobby took me to Ideal Bagel for breakfast, a place that more than lived up to its name.

Later that night there was a graduation ceremony that we attended for two of his friends, followed by a graduation party, followed by us trolling downtown in search of somewhere to go. Unfortunately, throughout the entire weekend, every bar and restaurant closed at 11:30 due to COVID, so when we arrived around midnight, the streets were filled with morons looking around for a place that was still open and we were some of those morons.

The very next day, after waking up at noon, lunch was served at Cali n Titos, a beloved Cuban restaurant that they wanted to take me to. Not only was the food delicious but the setting was gorgeous, making for a friendly atmosphere that only further enabled my love of sweet plantains.

Filled with food, the rest of the group went to a brewery, while I seized the opportunity to mull around downtown Athens, a place that I learned the night before had an amazing selection of boutiques. After the semester I’d had, I was looking forward to strutting down the street and going into any dress shop that interested me. I had to talk myself out of buying a black silk evening gown that was too big for me and a matching $90 pair of shoes. I mostly just bought jewelry: chunky rings and some heart shaped earrings.

The real event of my outing was when I went to Margo, a spiritual shop that sold all essential occult paraphernalia. I bought myself a ring that is supposed to ward off the negative forces in my life, although I’m not sure what it does when you’re the negative force in your life.

I seized on the tarot card readings. Having successfully had my palm read in Italy several years ago, I was hip to the whole vibe. Like most people, I question the validity of tarot cards as a means of divining the truth, but like any true X-Files fan, “I want to believe.” She took me upstairs to do the reading in a room that looks nicer than most of the therapy offices I’ve been in, which is fitting since in some ways it felt like therapy. She informed me first and foremost that tarot cards were not a way of glimpsing the future, but more accurately that they tell you about yourself and where you’re currently at in life. She displayed the cards in an attractive array and told me to pick the three that I felt most drawn to. I felt compelled to choose the four swords, the queen of wands, and the queen of cups.

Because I pulled the four swords, she said that I needed to relax; not surprising after the semester I’ve had. I was especially convinced that she was correct when I read the words “Hermant’s repose,” as a way of describing the four swords, which is how my mother describes me. Then there was the queen of wands, which told me that in order to be successful in life and to attract a partner, I’d need to be my passionate and vivacious self and not shy away from my true and inner boldness. Finally, there’s the queen of cups, which means that my intuition will see me through my current situation, so I must listen to it.

In the end, I was told that I needed to rest and relax, be my boldest self, and trust in my intuition, all of which is a good sign that I’m on the right track. She was surprised that I had two queens in one hand, but that’s what happens when you’re a Tragic Queen.

I met up with the group again at Creature Comfort Brewery, a place so relaxing that it seemed like the type of place that would actually be enjoyable if I was allowed to drink in it. There was cool music playing, outdoor seating, and all around pleasant vibes. Staying there until the sun went down was easy.

After about an hour, we left for Blue Sky, another place that had some equally pleasant vibes and outdoor seating. There were young people everywhere, straddling the terrace benches, definitely celebrating graduation and taking in the evening.

The very next day can only be described as a lazy Sunday. I woke up late in the day and read. There was some dancing around my room, mostly to the Cure, and then I started a new book by Sally Rooney. For lunch, a.k.a. our first meal of the day, we got Kelly’s, an amazing Jamacain restaurant that I fell in love with. There was sweet tea, cornbread, rice, mac and cheese, and jerk wings, none of which I had available to me in New York.

Following that I went to Condor’s Chocolate, where I promptly spent over thirty dollars on truffles. This also should serve as a friendly reminder that money spent on chocolate is never wasted. Unless, of course, you’re diabetic, in which case it’s ill-advised.

I chose truffles in various different flavors: mocha, dark, raspberry, lemon, caramel, and others. On our way out of town, we stopped by Dondero’s Cafe, a cozy little cafe in a centuries old house.

The weekend consisted of things that I not only love but am obsessed with: great restaurants, window shopping, chocolate, reading, and down time. I got to hangout with my brother’s friends: Raj, Sol, Marquis, Mikaela, and Julian (seen in various photos above). They know how to make a weekend special.

Our Lorde and Savior at Radio City Music Hall

Tchaikovsky and Pushkin: my last trip to the opera for a while

A Night on the Town

The Late Show with Raquel Antonette