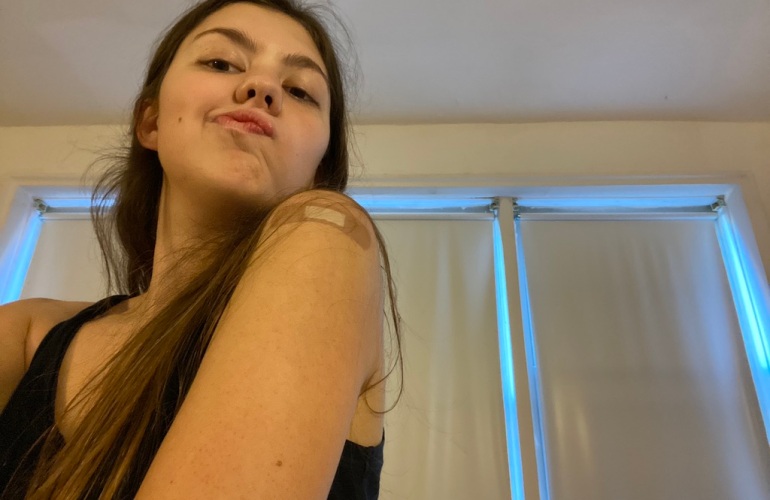 I spent the morning sipping my Earl Grey tea, listening to “Avatar: The Last Airbender” low-fi music and the sound of the rain. Two nights later I was doing a face mask and getting to bed early, so that I could read the Fran Lebowitz book that I’ve been looking forward to. Some days, I can’t tell the difference between this and my introverted ways before COVID. Those are good days.

It’d been raining here all week. I was going to get the Johnson & Johnson vaccine on Wednesday, administered by the school, but the nationwide halt changed that plan. In lieu of that, our school sent us to a vaccination site in Westchester. A few hours later, after a vexing online sign-up process that resulted in many tears, I went with my friend Tyler to the site.

They sat me down, asked me the obligatory medical question of “what is your birthday,” and much to our mutual excitement the nurse and I discovered that we had the same birthday (give or take a few decades). I love meeting people who have my same birthday, because, unless I’ve imagined it, very few people seem to have been born on June 29th. Since we’d built up a rapport, I warned her that I’m not great with needles. It’s not much except for my historically low threshold for pain, the counter-intuitive nature of sticking a foreign substance into my body, and the fact that whenever I see the needle going in all I can picture is the needle going straight through my skinny arm and coming out the other end.

The woman understood and assured me that “this too shall pass.” Instead of watching the injection, I picked a spot on the wall, which ended up being the banners of the victories of the Westchester Community College Viking’s Basketball Championships. It wasn’t bad at all. The initial injection didn’t really hurt, although soon after my arm felt so sore that I thought that my arm might fall off. It must have been the microchip. (I would like to specify for all of the conspiracy theorists out there, that was most definitely a joke).

While waiting the standard fifteen minutes post-vaccination, I scanned a barcode, using the camera on my phone in order to schedule my next appointment. I overheard one of the volunteers instructing another person to do the same, by stating, “we’re just going to let big brother take control, right now.” I burst out laughing, hopefully validating him and his literary references.

Once I got home, the side effects hit. At first it was just a fever and some chills, which set in that night. I wasn’t worried: this falls within the normal range of symptoms. The next morning I still had the fever, plus nausea, the kind where you feel like you’re going to throw up if you so much as take a sip of water. I spent most of the day in bed, trying to get my fever to ebb and sleeping in between my conferences. After nap number four of the day, I got up to pee, down a glass of water, eat my first meal of the day, and take my temperature.

You know that it’s a bad sign when standing up is where the problem starts. I knew I was uncoordinated before, but my inability to walk straight and the way that I bumped into everything, was a new low for me. The dehydration, lack of food, and staying in bed all day, in conjunction with my adverse reaction to the vaccine, didn’t exactly make for a banner day in my life. I drank a glass of water, put a slice of bread in the toaster, and couldn’t find the thermometer. I stumbled from the kitchen to my room and could not see anything by the time I got back to my room.

Ringing started in my ears, then everything around me went silent. I moved toward the chair at my desk when I collapsed. Miraculously, I didn’t hit my head on anything on my way to the floor, even though there were about five different things I could have hit my head on. I did take about half the contents on my desk down with me. I dragged down my keyboard, my atlas, and, ironically, the handout on the side effects of the Coronavirus vaccine.

I was sitting on the floor, sweating uncontrollably, unable to see or hear. I’d never had a serious health problem before; I hadn’t so much as fainted, so, when I was sitting there on the ground, missing half my senses, all I could think to do was call out for my suite mate Bella.

Bella helped me up off the floor and set me on my bed. She called our school’s 911 and gave me back my toast, although she offered to make me a new piece of toast that hadn’t been on the floor. My entire body was coated in some nice, sticky sweat.

My vision steadily came back in about a minute; the ringing persisted a little while longer, but that eventually subsided as well. I was offered an ambulance, but since my side effects dissipated and my body temperature plummeted, I decided instead to just chug some electrolytes and call it a day.

Even though I collapsed (the perfect get out of class free card) I went to class anyway. My peers were reviewing my piece that day and since it would be my last chance to hear their thoughts on my novel before the semester ended, I felt that I had no other choice but to go. I went early, told the professor what happened, and asked if I could go first in class. I spent the whole class in bed, with many eyes carefully on me.

I had no more serious episodes after that. I don’t want this anecdote to be mistaken for a reason not to get the vaccine. Most of the women I know have had strong reactions to the vaccine. I read that women tend to have stronger reactions than men do because the vaccine was designed with fully grown men in mind. This doesn’t surprise me.

Apparently, for centuries doctors treated women’s bodies under the assumption that they were the same as men’s bodies, just with added, obnoxious hormones, so they thought that the best way to study and treat women is to do so by studying men. Women are 73% more likely to die in a car crash than a man is, because seatbelts and airbags are also designed with fully grown men in mind. Is that why they call it “a man’s world?”

My female friends and I fainted and threw up and lost a day of our lives (but what’s a day in comparison to the year we lost?) My male friends got temporarily sore arms, but I’m not bitter about this. Overall, I’m just happy to be healthy and on the right track to being fully-vaccinated.

We’ll see how the next shot goes.

Our Lorde and Savior at Radio City Music Hall

Tchaikovsky and Pushkin: my last trip to the opera for a while

A Night on the Town

The Late Show with Raquel Antonette