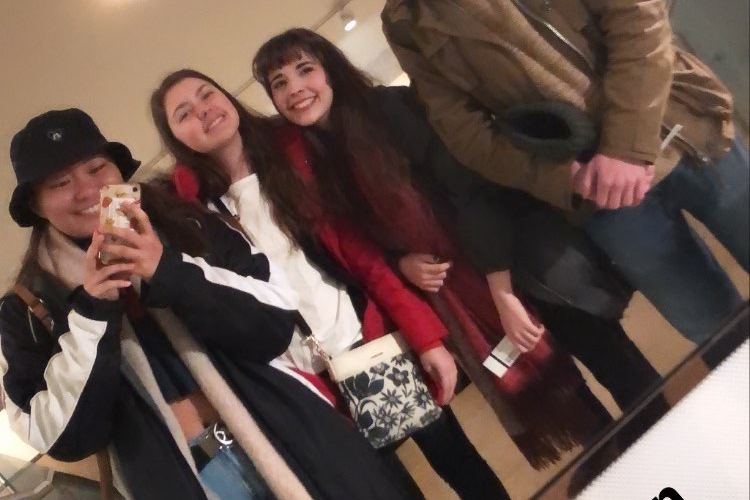 A week or so ago, my friends Theo, Chiara, and Petra, invited me to go and see a play with them at an NYU theater. Naturally, I wouldn’t turn down an opportunity to see live theatre, so I only asked a few questions before saying yes. My initial plans for Saturday night were to eat an entire sleeve of Thin Mints alone in my dorm room while rabbit-holing on internet videos. Just a reminder that Girl Scouts of America support transgender youth and teach girls leadership values. I, therefore, show my love for them by eating their cookies by the box.

I postponed my cookie plans so that my friends could take me into the city to see experimental, post-traumatic theatre about the Japanese economy. Before the play, my friends and I went to a restaurant called “Tipsy Shanghai,” which, as their awning boasts, has been around for 100 years. The Chinese food could perfectly be described using the word “yummy,” filling me up with hot pork dumplings and noodles.

Afterwards, we walked over to the theater at NYU. During the first act, I went cross-eyed trying to keep my eyes open. There were several lulls, I assume to make it seem pensive, and there were rows of tennis balls on stage despite having nothing to do with tennis. The play was entirely in Japanese, with the exception of subtitles projected onto the wooden panels hanging over the stage. The play did not consist of actual characters, scenes, or dialogue but instead was just people speaking in Japanese while touching the copious amount of objects on stage. Apparently, the play was supposed to be about the decline of the Japanese economy in the 90s and its ramifications. I could figure that out by the fact that the whole beginning part was about a washing machine that wouldn’t work, but then a time machine showed up that nobody used and that had something to do with immigration. I am unsure as to how it ended but it did seem like a fair amount of philosophizing happened in the final act but I was already too far gone to pay any attention.

The underbelly of New York City theatre rears its ugly head. The play used “the emperor’s new clothes” model, meaning that it wasn’t good but no one will admit it out of fear of looking dumb. However, my friends did seem to like it and went on about what they thought the best parts of it were. My friends thought that I would like it the best, and quite frankly so did I, so you can imagine our disappointment when the play was done.

I don’t think that it has anything to do with my imagination, education, or upbringing, but there are some things that I will never be able to wrap my head around, like abstract art, micro-food, extreme haute couture, and now conceptual fringe theatre. To some people, it might seem like I only like mediocrity, because I like more conventional media, such as, Hamilton, John Mulaney, and Fleabag. The truth is though that your average junk means everything to the person who likes it, despite whatever you might say about the “artist’s intentions” or “the underlying themes of the broken capitalist system” or what have you.

I like things that more closely resemble the human condition and the things that do show it deserve my love. I would rather give my money to profiles in humanity than participation-trophy-theatre. I don’t want to be the type of person who tells someone that there is something wrong with them for not understanding the meaning of art when in reality there was no meaning or art in the first place, nor do I want to be that liberal arts college student who annoyingly thinks that they have everything figured out and that they are artistic and deep because they once wrote rhyming couplets about breast milk. I do however want to be a great artist, since art is the spice of life.

So go out into the world so that you might make good art and buy a box of Girl Scout cookies!