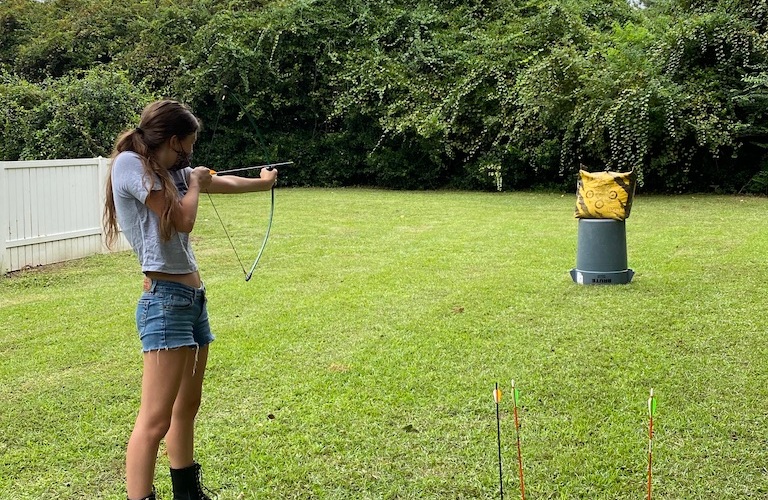 Around this time last year, I was playing an end of summer baseball game with my friends, Anna and Mary Catherine. This year, since the Tokyo 2020 Summer Olympics were cancelled due to the Coronavirus pandemic, I decided that we’d put on the 2020 socially-distanced Summer Olympic games.

Picture an epic sporting event, a triumphant sports tournament filled with throngs of people rallying behind their team members as we go head-to-head against each other in games of endurance. This, was not that. Unfortunately, since I only have two friends presently here and one of them couldn’t make it, the Olympic games were played by just me and my friend Mary Catherine.

And you guys might be thinking “But wait, Raquel, it isn’t summer anymore,” to which I would reply, “you clearly don’t live in South Georgia.” In all honesty though, the day ended up being far cooler than any other day thus far. The wind was blowing, the air felt brisk, and the weather was far more temperate than it had previously been.

So this is my belated, two-person, socially-distanced Summer Olympics, because nothing is right. I’d also just like to add that we promptly dedicated our event to the memory of the late great Supreme Court Justice Ruth Bader Ginsburg, a woman who championed countless women’s rights issues, including cases that involved women’s participation in sports. May she rest in power.

I came up with three different games to play, starting with Archery. Mary Catherine, who went through a pretty serious Percy Jackson phase, brought her bow and arrow set, while I provided the sand-filled target that the previous owners left behind. While we started off making a few mistakes, such as not holding the bow properly, always aiming too high or too low or too far to the side, we eventually got to the point where the target was no match for us (sort of). I’d say that it ended in a tie.

Rowing, otherwise known as Crew, has been an Olympic event since the year 1900, and a women’s Olympic event since 1976. In the absence of legitimate boats, we used my two inflatable pool floaties to get to either side of my pool. Using a paddle and a plastic stick I found in my garage, that I think used to be part of a mop, we paddled across my pool six times each, competing to see who’d get there first, as the Olympic theme music played in the background.

The rules were simple: climb onto your float and stay on it. If you fall off, get back on before moving. Paddle to the opposite end of the pool six times. The frigid cold, numbing water became exhilarating and after a few seconds of rapid movement, it wasn’t even cold anymore.

The act of paddling, kicking your legs, clinging to an inflatable pool floaty, and trying to latch back on after you’ve capsized was more of a workout than either of us anticipated. All of our muscles are still seething with regret. We played this game four times.

Oh right, and Mary Catherine won all four times. Falling into the water seemed to be more of an issue for me than it was for her.

I have since been informed by my father that “spear-throwing” is not the actual term for the Olympic event in which people toss spears in the hope of lodging them far into the ground, at a great distance. We used the poles that we put in the potted olive trees in our backyard and threw them in my front yard. We had a captive audience of anybody who drove by and my mother who observed us from the balcony. It also took us a while to realize that when people actually play this game, they have to get a running start and then throw the spears.We charged across my yard and threw them as far as possible, rarely having them actually stick into the ground.

I’d say I won this one. Mine always went slightly further each time.

Afterwards, we treated ourselves to hot chocolate and my mother’s freshly-made snickerdoodle cookies, while watching “Booksmart.” While we were doing all of this, my parents were setting up some autumnal decorations, placing us fully in the throes of fall. The next time we do this, I will be sure to light a torch and to paint the Olympic rings all around the house.

It was an amusing way to spend a day and a pretty great way to trick kids into exercising. This day served as an excellent finale, as I said goodbye to summer.

One thought on “The 2020 Social-Distance Summer Olympics”